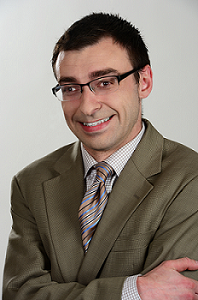 Jason Benetti is a TV play-by-play announcer for ESPN and the Chicago White Sox. He joined ESPN in 2011 and has called college football and basketball for the network along with Major League Baseball, including the 2018 National League Wild Card game. His assignments for ESPN Radio include NFL and MLB games along with college football. Benetti joined the White Sox in 2016 and just finished his third season with the team.

In addition, Benetti has called the NCAA Men's Basketball Tournament for Westwood One radio in each of the past two seasons. He has had broadcasting jobs with Fox Sports 1, the Syracuse Chiefs (Washington Nationals Triple-A affiliate), Time Warner Cable Sports, and High Point University, among others.

Mr. Benetti graduated from Syracuse University in 2005 with bachelor’s degrees in broadcast journalism, economics and psychology. He then earned his Juris Doctor at Wake Forest School of Law in 2011.

The Illinois native is a spokesperson for the Cerebral Palsy Foundation, including a new animated campaign he and CPF launched in 2018, entitled "Awkward Moments."

Mr. Benetti has taught sports broadcasting and sports interviewing as an adjunct professor at the S.I. Newhouse School of Public Communications at Syracuse University. 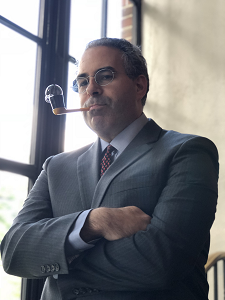 Garey Noritz, MD is an Internist and Pediatrician at Nationwide Children’s Hospital.  He is section and division chief of the Complex Health Care Program, which provides a medical home to children and adults with neurodevelopmental disabilities. He is Professor of Pediatrics at The Ohio State University, and the Director of the Comprehensive Cerebral Palsy Program at Nationwide Children’s Hospital.

Dr. Noritz is a graduate of the Brown University School of Medicine and of the Internal Medicine and Pediatrics residency at MetroHealth Medical Center and Case Western Reserve University. He is Board Certified in Internal Medicine, Pediatrics, Neurodevelopmental Disabilities, and Hospice and Palliative Medicine.  He is active at the national level in advocating for the care of children and adults with disabilities.  He is on the Executive Committee of the Council on Children with Disabilities of the American Academy of Pediatrics, and is past Chair of the Lifespan Committee of the American Academy for Cerebral Palsy and Developmental Medicine. In 2013, he was awarded “Physician of the Year” by Nationwide Children’s Hospital.

Dr. Noritz’s research interests include efforts to improve the early detection of young children with motor disorders, bone health in patients with disabilities, transition of children with disabilities to adult models of care, palliative medicine, and the primary  care of patients with neuromuscular diseases. He is also a founding member and on the Executive Committee of the Cerebral Palsy Research Network (CPRN), which is a group of doctors, therapists and patient advocates collaborating to improve treatments and outcomes for people with CP. The network currently has 25 member sites. Dr. Noritz serves as the Principal Investigator of the CPRN’s clinical registry.

Dr. Noritz was the lead author of the American Academy of Pediatrics’ 2013 clinical report, “Motor Delays: Early Identification and Evaluation”, which advises Pediatricians to institute screening for motor problems in early childhood. He authored the primary care section of the latest update to “Diagnosis and management of Duchenne muscular dystrophy” in Lancet Neurology. 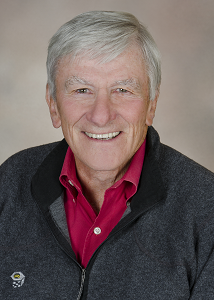 Dr. Russman’s career has been involved with general pediatric neurology, first in CT at Newington Children’s Hospital, an affiliate of UConn Medical School. He then moved to Portland OR, working at Shriners Hospital for Children and OHSU, in the department of Pediatrics and Neurology. His specialty interests have in neuromuscular disease and cerebral palsy, responsible for the MDA and  cerebral palsy programs in CT and now OHSU. He has been active in the Academy of Cerebral Palsy and Developmental Medicine, being on the executive committee for 3 years and then president of the Academy in 2005. 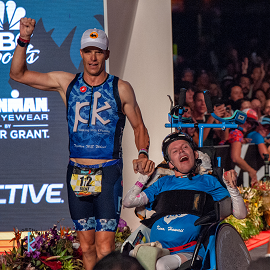 A four-time Ironman triathlete, Mr. Kyle Pease has a career total of more than 75 races. Since 2011, he and his brother, Brent, have competed in races across the country, most recently becoming the first brother duo in history to complete the grueling Ironman World Championship in Kona, Hawaii.

Born with Cerebral Palsy, Kyle has strived for life beyond his wheelchair. Through his work with the Kyle Pease Foundation, he’s focused on creating opportunities for inclusion in sports for athletes with disabilities. A motivational speaker and greeter at Piedmont Hospital in Atlanta, Kyle graduated from Kennesaw State University with a B.S. in Sports Management. 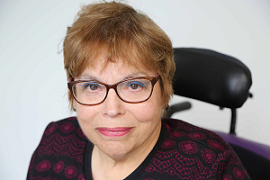 Judith (Judy) Heumann is a lifelong advocate for the rights of disabled people. She contracted polio in 1949 in Brooklyn, NY and began to experience discrimination at 5 years old when she was denied the right to attend school because she was a "fire hazard." Her parents played a strong role in fighting for her rights as a child. Judy determined that she, working in collaboration with other disabled people, had to play an increasing advocacy role as she and others experienced continuous discrimination because of their disabilities.

She is now an internationally recognized leader in the disability rights community and a lifelong civil rights advocate. She has been featured in numerous documentaries on the history of the Disability Rights Movement and recently her story was told on Comedy Central’s Drunk History, in which she was portrayed by Ali Stroker, the first disabled woman to play on Broadway and Judy has also delivered a TED Talk. As a Senior Fellow at the Ford Foundation, she is currently working to help advance the inclusion of disability in the Foundation’s work and is leading a project to advance the inclusion of disabled people in the media. She also currently serves on a number of non-profit boards of directors and is an Ambassador for Leonard Cheshire based in London.

President Obama appointed Judy as the first Special Advisor for International Disability Rights at the U.S. Department of State, where she served from 2010-2017.  Mayor Fenty, District of Columbia,  appointed her as the first Director for the Department on Disability Services, where she was responsible for the Developmental Disability Administration and the Rehabilitation Services Administration. From June 2002- 2006, Judy served as the World Bank's first Adviser on Disability and Development. In this position, she led the World Bank's disability work to expand the Bank’s knowledge and capability to work with governments and civil society on including disability in the global conversation. From 1993 to 2001, Judy served in the Clinton Administration as the Assistant Secretary for the Office of Special Education and Rehabilitative Services in the Department of Education.

She was also responsible for the implementation of legislation at the national level for programs in special education, disability research, vocational rehabilitation and independent living, serving more than 8 million youth and adults with disabilities. 1982-1993 she cofounded the World Institute on Disability with Ed Roberts and Joan Leon.  WID was the think tank run by disabled people focused on research to advance the Independent Living Movement. 1973-1993 Served as a founding member of the Berkeley Center for Independent Living and then on it’s Board of Directors.  CIL Berkeley was the first Center in the United States and helped to launch the Independent Living Movement in the US and around the World.

Judy’s goal in life is to continue to advance the rights and empowerment of ALL disabled people around the world.